With Morgan getting some much deserved time off for the weekend, we decided it would be an awesome adventure to take a mini-vacation up to the Delaware Water Gap National Recreation Area, a large swathe of National Forest in northern PA and NJ. “The Gap” straddles a 40 mile stretch of the Delaware river and is roughly 70,000 acres in size of (mostly unbroken) protected forest. We had taken a trip up here nearly a year ago after a large snow storm to do some snow shoeing and wanted to go back to explore more of the park. Before setting off, I booked us a hotel room in the town of stroudsburg so we could hike late into the day on Saturday and get hiking early on Sunday.

We set off Saturday morning around 7am from the Philly house to cloudy skies and mild temperatures to make the ~2 hour drive to our first hike at the southern rim of The Gap, crossing into NJ and passing the town of the aptly named Delaware Water Gap. We went through some twisty, backwoods roads to arrive at our hiking destination. The hike I selected was originally intended for our snowshoeing trip (if you’re interested – Edge of the Woods Outfitters), however due to an amalgam of events, was changed at the last minute to an alternative hike along the Appalachian Trail, which runs right through the middle of The Gap.

The hike we were going to embark on was the stitching together of a few trails, which included Blue Mountain lake, Hemlock Pond, and Crater Lake (NPS-Blue Mountain Lake), located in the heart of The Gap (a map can be found here – Appalachian Trail Map). The

first trail system called Blue Mountain Lake is something that looks rather unusual from what i’ve come to expect from a trail system when viewed on a map. Long rows of parallel lines, with almost perfectly perpendicular bisecting lines forming a “grid” of trails as seen in the picture. After some research and reading a short history blurb written by Tamara Scully and found here (Paradise Lost, and Found) I discovered that Blue Mountain lake was originally intended to be a quiet vacation community. In fact, Blue Mountain Lake did not exist before the middle of the 20th century, when it was created to provide for a pristine oasis for urbanites from New York and New Jersey. If you are interested, I encourage you to read the article, however suffice it to say, the entire community went defunct and the land was acquired for the purpose of incorporating it into the Delaware water gap. Using these paths as a jumping off point, we would add trails connecting to Hemlock Pond and Crater Lake and ultimately loop back around, skirting the southern rim of Blue Mountain lake and arrive back at the car, with an estimated distance of about 8 miles.

We arrived at a trailhead with plenty of parking space, bathrooms, and a map of the trail

we were about to conquer. Morgan advised me that the bathrooms were adequate, however being of bare metal, were rather cold to the touch given the temperature at the beginning of the day. We started by taking the upper trail, which passed about a quarter mile north of the lake, barely visible through the brush. The hike outbound to Hemlock Pond was

straight, level, with mild elevation changes of up and down oscillating trail, heavy fog and mild temperatures. We made quick work of it, arriving to Hemlock Pond shrouded in fog and dew, making for some great photos. We took a quick snack and water break, and headed up and around the lake in a clockwise direction in search of the connecting trail that would lead to Crater Lake. There were numerous trails that tailed off of the trail that surrounded Crater lake, and we spent some time trying to find the right one (this is visible from my GPS plot), retracing our steps when the trail would abruptly end.

Once found, the trail became rather narrow, rocky, and quickly ascended up over the mountain that lay between Hemlock Pond and our destination of Crater Lake. We had to take several water breaks and shed some of our outer layers to keep cool and dry in the face of the unanticipated climb of ~250 ft. We then caught up with the Appalachian trail (which passes briefly through the area) and descended towards our lunch spot on the banks of Crater Lake. The water was crystal clear, the sun came 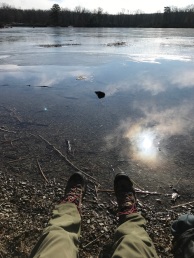 out, and we sat down to enjoy a quick lunch and snacks. After cleaning up, it became obvious that this area had also once been slightly developed because of various foundations and concrete sporadically around the lake. We made our way clockwise around the lake via the appropriately named Crater Lake trail meeting back up with Appalachian trail. We retraced our steps back to Hemlock Pond, barreling down the rocky mountain trail that we had just previously ascended. We continued clockwise for about a quarter of the Pond and met up with the trail that would take us back to Blue Mountain Lake. Heading back west towards the car, the 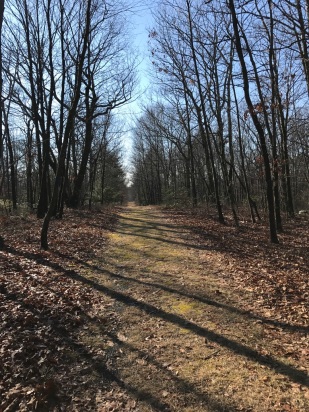 trail quickly became the straight, undulating path we had experienced on the way out, except this time it was the southern of the trails.

We reached the lake, and stopped to have a look around. The lake was clear and cold, partially frozen in the gleaming sun. I can only imagine how different it would have looked if this wilderness had been developed into the vacation homes that had been planned. The calm, tranquil lake and surrounding woods grazed in favor of houses, roads, cars, and restricted private property.

We finalized the journey and returned to the car. “But wait!” Morgan cried, “I want to see a water fall!” I replied with, “can we drive up to it?” Not really wanting to tack on more hiking for the day, since I was pretty tired. I checked the GPS and it looked like Buttermilk falls had a parking lot 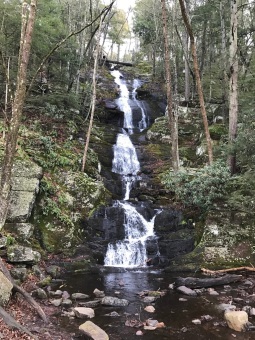 adjacent to it and seemed like a sure bet to satiate Morgans desire for falls. Well, here is another example of how the GPS doesn’t necessarily tell the whole story. Fortunately, the mistake was minor and the road was only closed about a mile out from the falls. The road itself was atrocious and fortunately the AWD Subaru got us through pot holes, divits the size of mini-coopers and puddles of water/mud/ice of unknown depth. We parked on the side of the road and laced up for the hike down the paved road, though I made my protests evident about hiking more. Although the sun was setting and the temperature was dropping (and my feet were hurting), the walk was pleasant and scenic. Heading east, on the right of the road was sheer rock face and to the left was open field, farmland at some point in the past, now overgrown with time. We encountered several buildings along the way, old barns or houses worn down by the elements after they were abandoned by residents and bought up and incorporated into the park system. We reached the falls (which did have a parking lot by the way) and were among 5 or 6 other people eager to get in a view of a waterfall before the sun set. After a few pictures, we headed back to the car and slowly crept back to the main road, eager not to get a flat tire. Although I wouldn’t admit it at the time, i’m glad we got this smaller second hike in to see the falls. We made the hour drive to our hotel, located in Stroudsburg, PA with the sun barely visible over the horizon.

I always chuckle to myself every time I walk into a hotel after a long day out, caked in mud and sweat, wondering what the front desk people think (or smell for that matter). But i’ll tell you this, dear reader, that nothing feels better than a nice long shower after a full day of adventure. Stay tuned for day two!