Waking up from a well deserved rest, we made our way down for a quick bite to eat from the hotel breakfast bar and headed back up to our room to pack and get ready for another day of spirited hiking. The weather was warm, albeit with cloudy skies and mild fog but certainly good enough for us. We decided on a shorter hike, with a requisite waterfall and some views of the Delaware river. This would be coupled with a visit to Weyerbacher brewery in Easton, PA as it was perfectly situated between our hike and home.

Our hike for the day would take advantage of trails maintained by the Pocono Environmental Education Center (PEEC website), situated in the heart of the Delaware Water Gap, on the PA side of the Delaware river. We chose a trail called the Tumbling Water Trail (PEEC Map), which included rounding two lakes and access to a waterfall, perfect to satisfy Morgans desire to see one each day of our vacation. The trail would also provide us with views of the river from the ridgeline.

We checked out of the hotel, and packed up the car to head along the federally maintained Rt. 209 towards the PEEC. One note here is that there is a trail that runs along the DE river called the McDade recreational trail, 32 miles of almost unbroken gravel (?) trail for biking/running that would make an excellent trail for trail running or cycling in the future. This trail was visible off to our right during the scenic drive along 209 before we made the left-hand turn to ascend towards the PEEC, letting the car do most of the climbing for today. We arrived at the main building and a mostly empty parking lot, took a quick second look at the trail map, and after morgan used the bathrooms, we set off into the mist. The hike was moderate through dense forest, with a slight elevation climb to the first scenic overlook, “chimney ruins.” Due to the fog, visibility was less than half mile, however the river was pretty visible as were the stoney ruins of the chimney, the remnant of either a house or just a backyard BBQ pit, couldn’t really be sure.

Going along the ridge, the rock seemed like vertical layers of thin rock/shale, however I lack the background to fully describe what it actually was. Regardless, it made moving

along the ridgeline somewhat precarious, having to take extra care to place boots surely on the ground. The terrain became more difficult, descending towards the waterfall first by steep graded rock, then down relatively safe stairs. The area really had two waterfalls, with the viewing area in the middle. This is to say that we were at the base of one waterfall and at the top of another water fall, with a small pool in between. We took 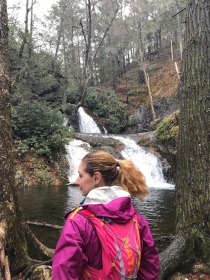 pictures and hopped and jumped all around, looking down on the lower falls and misted on by the upper falls. After a quick snack, we ascended the stairs with much huffing and puffing and slowly ascended back up, paying off the debt we accrued originally during the descent towards the falls.

The latter half of the hike winded through tall forrest, and through a promenade lined on either side with large pine trees. We reached the pickerel pond first, with a low haze of fog hanging over it and made our way around back towards the parking lot, passing the other smaller pond, Front pond. We had another quick snack and water and started up the car to get to the next event, Weyerbacher brewery.

Located in Easton, PA Weyerbacher brewery was started in 1995 by Dan Weirback when he began to brew high alcohol content brews to satisfy the locals, who took a liking to the potent beverages that overshadowed the typical “light beers” popular at the time; honestly, who can blame them? This we learned, among other interesting facts during the ~15 minute tour that was followed by a flight of beers in their (large) garage-esque brewery. Although they had a few snacks available, we brought in our leftover trail snacks to munch on while we sampled the aggressive, rapacious beers. I had occasionally seen Weyerbacher beers on the shelf locally at distributers or eateries, the harrowing jester staring at me, tempting me to take a chance on it. But often, I like to go to a brewery and try a suite of their beers before I make a decision on if I like them or not, not leaving it up to a single beer to decide the fate of an entire brewery. Although highly antagonistic, the beers I had at Weyerbacher were generally well balanced, with a good mix of different styles and would definitely go back to try some more. I know morgan enjoyed the beers more than I did, as they were often fruiter or less hoppy that my style of choice, IPA.

After finishing up, we made our way home, ending our 2 day long adventure a little less stressed, a bit more refreshed, and certainly longing to be home with the pets. Zelda, of course was very excited to see us, although secretly I think she enjoys her vacation with my grandparents as much as we enjoyed ours. I’m very certain that, as before, this won’t be the last time at the Gap.